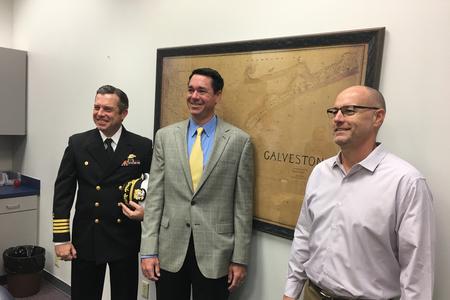 The pilot commissioners held their public meeting in the law offices of the Honorable Judge Mark Henry in the Galveston County Annex in League City. The Board of Pilot Commissioners is appointed by the Governor to act on his behalf and the actual five-year commissions will come from the Governor.

Captain Tracy, a full branch pilot, served seven years in the US Coast Guard and twelve years as a Tug Boat Captain prior to being selected as a Branch Pilot. He has just completed his first four years as a full branch pilot and currently serves as Vice President for the Galveston-Texas City Pilots.

Captain Mitchell, prior to being selected as a Deputy Branch Pilot, sailed for twenty five years on vessels ranging in size from paddle wheel vessels to serving as Captain aboard one of the world’s largest Tug and Barge units.

Captain Bush spent seventeen years both in and with U.S. Navy as a SEABEE and with Military Sealift Command, where he commanded the world’s largest underway-replenishment vessel. Captains Bush and Mitchell just completed their rigorous two-year apprenticeships which consist of working approximately 340 days their first year and handling almost 1,000 vessels by the end of their second year.

“We are very lucky to have these captains working in Galveston County,” said Captain Hogan.  “Captains Bush and Mitchell were selected from a pool of hundreds of applications that the Pilot Board received from all over the country.  They underwent a rigorous two-year training program where they learned the hazards of our ship channels, and how to handle some of the largest and most sophisticated ships in the world.  We are very proud to have these Captains working here and protecting our county’s waters and we thank the Board for their hard work.”

About the Galveston-Texas City Pilots

The mission of the Galveston-Texas City Pilots is to guide vessels safely to their berths or out to sea.  As state licensed pilots, the Galveston-Texas City Pilots’ primary responsibility is to protect the public interest of the State of Texas by facilitating the safe and efficient movement of vessels in state waters by exercising independent judgment to protect the property, lives, environment and the economic well-being of the Ports of Galveston County.