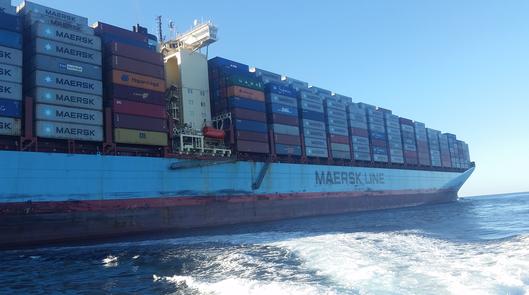 While not one of the biggest container ship classes that some ports see, the SOFIE MAERSK at 92.198 GT is the largest container ship ever to call on Honolulu.  A USCG Captain Of The Port issued a letter limiting her movements to daylight hours and requiring 3 tugs and 2 pilots.  Captain Rich Demuth piloted the ship inbound on March 26th, with CaptainTommy Collins serving as second pilot.  The ship's engine had been repaired by the time the ship got here and she entered the harbor under her own power.  The ship needed to enter the harbor to take bunkers since the bunkers on board were contaminated and the ship did not have enough good fuel on board to reach her original destination in China.  On March 28, the ship departed in the early morning with Captain Collins, again, serving as second pilot with me.  Our biggest concern while we were planning for her arrival was the weather.  Strong winds would have made the arrival difficult or possibly resulted in a cancellation.  There also was concern about whether the bollards at Pier 2 were strong enough to hold a ship of this size securely moored in a high wind situation.  Luckily, we had ver light winds for both movements.

The ship did attract a lot of local media attention, and was very noticeable to the non-maritime community since it dwarfed the downtown high rise buildings and blocked a lot of views.