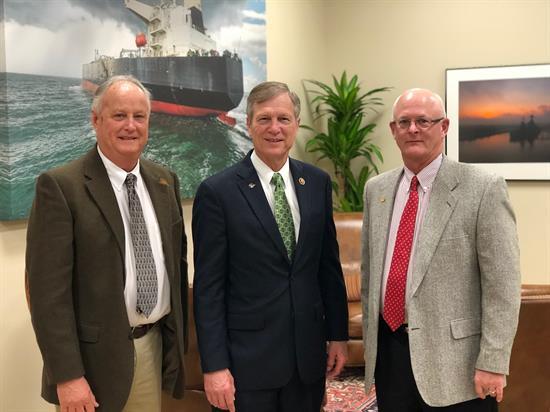 Honors continue to shower two Texas Pilots for their heroism in September 2016 aboard a burning tanker on the Houston Ship Channel.

U. S. Congressman Brian Babin of the 36th District of Texas presented two flags, which were flown over the U.S. Capitol Dome, along with Certifications of Special Congressional Recognition to Houston Pilots Captain Michael McGee and Captain Michael Phillips.

"It was my honor to present Captains McGee and Phillips with a flag flown over the U.S. Capitol in their honor, recognizing them for their heroic efforts aboard the 800 foot tank-ship AFRAMAX RIVER.  We are proud to have these heroic fellow Texans serving and working in our community," said Congressman Babin.

Babin also recognized that The International Maritime Organization for the first time in its storied history presented its highest - the award for Exceptional Bravery at Sea - to the two pilots.  Captains Phillips and McGee were honored in special ceremonies at IMO headquarters in London, UK.  The Texas Pilots were recognized for saving lives and preventing a catastrophe on one of the busiest ship channels after their tanker, AFRAMAX RIVER, struck a mooring dolphin and erupted into flames and smoke.