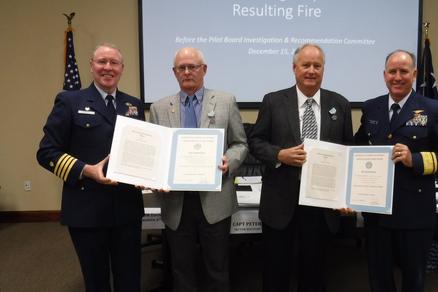 chosen by IMO for maritime industry’s

highest award for bravery at sea

Houston, TX  July 31, 2017 The International Maritime Organization (IMO) has named two Houston Pilots - Captains Michael McGee and Michael Phillips - as recipients for the 2017 Award for Exceptional Bravery at Sea.  They are the first harbor pilots ever to be nominated and named recipients of the prestigious IMO award, announced Captain Robert M. Shearon, presiding officer.

Nominations for the award are solicited annually worldwide from United Nations member states, intergovernmental organizations, and non-governmental international organizations in consultative status with the IMO.   While nominations are accepted annually, the award is only presented when merited. The International Maritime Pilots Association nominated the two Houston Pilots. The awards will be presented November 27 at a special IMO ceremony.

Last February, the Rear Admiral David R. Callahan for the USCG 8th District presented Meritorious Public Service Awards to Captains McGee and Phillips for their fearless actions in preventing a disaster on the busiest commercial shipping waterway in the United States.

Captains McGee and Phillips were dispatched September 6 to the M/T AFRAMAX RIVER at Houston Fuel Oil Berth 3.  Due to its large size, this massive tanker required two pilots.  McGee was conning the vessel and undocking when the ship experienced an engine failure and struck two mooring dolphins located just off of the end of ITC Berths 7/8 at about 0010 hours.

As a result of the contact, a port fuel tank ruptured causing a spill of diesel fuel that ignited and burned. The pilots maintained their stations in the wheelhouse surrounded by a towering wall of burning fuel. The water and the vessel were engulfed with flames. With disaster seemingly imminent, Phillips turned to McGee and warned, "We are going to die.” The blaze would burn for 90 minutes before being extinguished, allowing McGee to return the vessel safety to dock.

“Capt. McGee has been a Houston Pilot for 18 years and Capt. Phillips for 24 years.  They exemplify the quality of master mariners who comprise the Houston Pilots Association,” said Capt. Shearon. “We are very proud of them as well as of their achievements and contributions to state pilotage.”